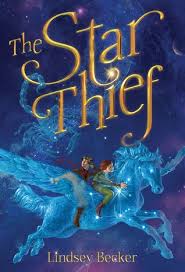 The Star Thief – an exiting story of a girl, who is only half human – her other half? Mordant.

What is a Mordant? A Mordant is pretty much a mythical being who matches a constellation in the night sky. They are near invincible, exploding into specs if hit, then coming back together afterwards. This girl, Honorine, doesn’t’ know that she isn’t fully human. Until one night, when some Mordant come and take her away to help them defeat the enemy, Nautilus. But it turns out Nautilus is her father. What happens??? You might be screaming at me. I am not going to tell you, because it would spoil it, and you should be able to find it in the library or bookstore. It is a very good book, and I recommend it.