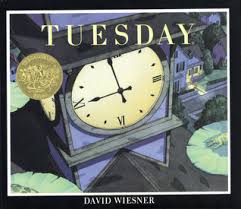 The other day, we watched a read aloud of a book called Tuesday.

It was mostly pictures, and almost no words. I would say less than 10! This made it engaging to read. The pictures were well drawn and a bit funny to. It’s about one Tuesday night when some frogs left their pond and went flying around town on lilypads, freaking out humans and other animals. At the end, the author set the time to the next Tuesday. On that night, pigs flew! I found it amusing that that day was Tuesday as well. I would rate this book 8 out of 10. It was a silly book. I liked it a lot.

That is my review of the book, Tuesday.

Here it is. Write what you think!