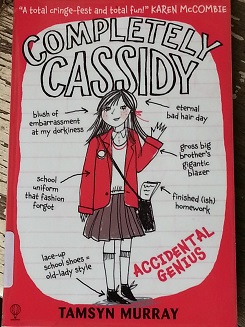 What it is about:

“My life is a joke. Actually, that’s not true – it’s too TRAGIC to be funny – but it IS a total disaster. You might think that I sound a teensy bit DRAMA-QUEEN-ISH here but that’s because you don’t know the full horror.”

So says Cassidy Bond at the beginning of her story about the first term at her new school as a Year Seven. Her mother’s pregnant, her father’s an Elvis Presley impersonator, her brother’s in a rock band, one of her two best friends is acting very strangely. Throw in a test that shows she’s a genius, an inter-school quiz and a talent show, and you’ve got everything for a clever and amusing book told through the eyes of an 11-12 year old.

If I told you any more, it would spoil the story.

I was hesitant to let my daughter read this book because it reflects the stereo-typical over-wrought emotional tragic inner-workings of a girl a few years older than her. For instance, Cassidy is very interested in boys – one boy in particular – considers everything a disaster (and some things are pretty bad…in a funny way), and is disrespectful toward her parents and brother. Some will say it’s true to life, but it’s not true of my daughter’s life at her age. I was not sure I wanted my daughter to read first person narratives of someone swimming in the confused throes of early adolescence. (No, nothing biological!)

But…I did let my daughter read it in the end. I briefly talked to her about the attitudes and actions of the characters, but I was also encouraged by Cassidy’s realisation that her parents, her brother, and her life were actually wonderful after all.

There is also a reconciliation that I thought was very moving and positive.

Apart from that, it is actually very funny. There are a couple of scenes where I laughed out loud and the whole book was very entertaining. However, knowing what I know now, I would probably encourage my daughter to leave reading it until she is a little older.

No one, except the boy Cassidy is interested in, is seen as perfect. This is because we are looking through the eyes of a 11-12 year old girl. Her mother is seen as demanding and the babies on the way annoying. Her dad is embarassing (but also very kind) and her brother is a pain. One of her best friends does not follow the script Cassidy thinks she should and Cassidy portrays her, rather than Cassidy as the one going off the rails.

However, it is also possible to read underneath the narrative and see things a little more objectively than Cassidy. And, as mentioned above, Cassidy comes to realise that the attitudes and opinions of people she had been operating out of were out of whack, and was able to right them at the end of the book.

It’s a fun book. Cleverly written, with relatable crises and angst from a young girl’s point of view. It’s probably more for 11-12 year old girls, but my daughter enjoyed it, too. And at 208 pages, the painful (and funny) situations she gets herself into are not too drawn out.

A good read for you and your child, as long as you are happy with your child’s ability to digest the less admirable thoughts and opinions of a Grade 7 (English) girl.