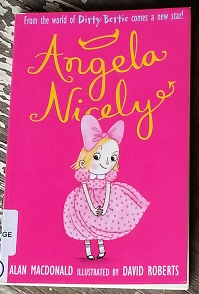 Angela Nicely (about 6 years old, I think) is an engaging, if not what you’d call a well-behaved, girl. Her misbehaviour is not malicious (perhaps with the exception of getting her modelling rival wet) as much as singularly focused. Who wouldn’t want to figure out if the head teacher is wearing a wig? How else are you meant to get on top in the modelling game? And when a weekend spa turns out to be a weekend arghh!, you have to do something, right?

A funny, light and entertaining book. The stories are not too long – I managed to read the first one to the kids between dinner and dessert one night (though I did hold up proceedings a little by doing so). They have climaxes and complications that make you sit up and take notice. And through it all, you find yourself wanting the best for Angela, even though you recognise what she’s doing is not the smartest thing.

A really decent read. Not boring at all.

Virtually no one is written as perfect. Instead, both adults and children have their foibles and weaknesses played up for a laugh. Angela is curious and incautious. Her mother is jealous of another mother and child. Her father hides away from his wife’s passionate plans. The staff at the school are tired and exasperated or don’t like children. Angela’s friends try to put the breaks on Angela but get swept along with her plans.

None of the main characters are set up as role models, but rather people in whom we can see our own weaknesses and through whom we can laugh at ourselves.

The whole set up is cartoonish and obviously so.

With three stories in 96 pages, this is a short and entertaining read. It’s not meant to be taken seriously, unless you seriously want to laugh at yourself. Fun. If you want to bring a discussion of not taking people’s flaws seriously into it, I suppose that could be done, but I haven’t.