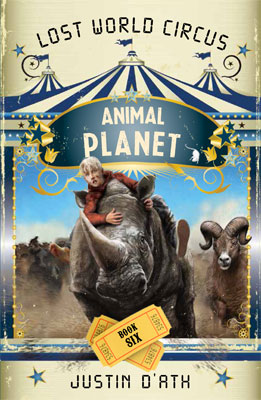 I have to say, Justin D’Ath is a good writer. Some of his books may not be to everyone’s taste – they have crisis after crisis with hardly anything in between – but this series is held together by a very compelling back story.

Imagine a world with no animals.

In these books the main story is that 12 or so years ago, a flu virus, carried by white rats, killed all of the animals of the world. The more you think about it, the more mind-blowing the idea becomes. Only one place still has at least some animal – a travelling circus, the “Lost World Circus”. Quarantined on an island, these animals avoided the virus, and years later were taken around the world in the form of a circus in an attempt to raise enough money to breed them.

So that’s the back story.

The front story (ha ha) involves a boy called Colt who joins the circus with his mother, a vet. As the story unfolds, Colt discovers he has super-human powers and, together with his friend Birdy, protects and saves the animals from DoRFE and the increasingly maniacal Officer Kat.

By the time the 6th and final book comes along (pictured above), the rat flu virus has changed and is now spreading to humans…

What else to say?

I like these types of books. These books are in Justin D’Ath’s normal style, but a little more spread out in terms of plot. In other words, there are places to breathe between one crisis and the next.

D’Ath creates a world which is internally consistent, characters that are deeper than the page they’re written on, and situations that resolve…but not quite. In one of the books, for instance, animals that go missing from the circus are not returned. People also have different motives which cause them to act in different ways – for Colt sometimes, and against him at other times.

My daughter recently finished the series and I can’t help but be happy that she was introduced to more than a black and white depiction of people. And, interestingly, she found the very end of the story a bit sad, precisely because it wasn’t a 100% fairytale ending (and, I admit, so did I).

Things to think about.

As parents of children who might read these books, it is worth knowing a few things.

First, Colt and Birdy are 12 and 10 years old respectively. At Colt’s insistence, they keep Colt’s superpowers to themselves, and also tend to take matters into their own hands. They deliberately sneak off from their parents and other adults, and tend to think they know best.

Living with a daughter who seems to think she knows best, I found that hard to swallow. I wasn’t keen to have that attitude reinforced. I know it’s part of the young book genre, but I wish that there were more books where the adults were portrayed as actually knowing what they were talking about and that the restrictions placed on the main characters were seen as wise, without which the adventure, whatever it was, had no hope of succeeding.

Second, some of the adventures and happenings are quite scary. Animals die. There is real threat of death for people, and Colt gets seriously injured a few times (though he recovers quickly due to his powers). But that’s part of what makes the books so engrossing.

Third, there is a strong emphasis on endangered animals running through the book – how could there not be. At the end of each book there is a “Lost World Quiz” which often talks about real-life animals. (Though one of them talks about what sort of superhero you are like). None of it is preachy and some of it I think it’s quite useful.

These are great books. Fun, clever, engrossing. I would recommend them to any child (or adult) with the reading age of about 7 or 8.