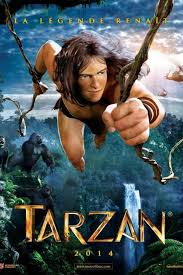 Yes, it’s out! And it has been since 2013. And it looks like a Barbie movie…in terms of animation.

Should you watch it?

Because it’s not an American movie….

A movie that’s not American is always a bit of a risk. After all, the big American movie makers have heaps of experience, screeds of money, and are brilliant at pacing a story for emotional impact.

Do I hate American movies? Far from it. So why am I banging on about this?

Because American movies are not all I want to see.

Right, now that’s out of the way, let’s get down to the movie itself.

It’s not a particularly involved story. It begins with the myth that an asteroid crashed on earth millions of years ago and wiped out the dinosaurs. This asteriod has minerals which in the future are a potential energy source. It also seems to have supernatural effects on animals and plant life around it.

Fast forward to today (not the time of the original Tarzan movie). Things happen and J.J. Greystoke ends up in the jungle, raised by apes. I’m even fast-forwarding that event, because the movie takes it pretty slow, setting scene in both the human and ape world. In fact, most of the movie is pretty slow moving, spending lots of time on Tarzan’s first meeting with Jane, his discovery of things from his childhood before he was stranded in the jungle, and a bit on the dynamics within his ape “family”.

It’s only when the bad corporate guy shows up that things begin to move a bit faster. He’s trying to get the asteroid, and is using Jane’s nature-loving (read: good) father and Jane herself to get it.

It all ends with a race against the clock before an explosion is set off and [Spoiler-alert] Jane joins Tarzan in the jungle.

For those of you who know the original Tarzan story, it’s quite different. Green is good. Using natural (or supernatural!) resources is bad. And so on. Still, it’s pretty okay.

For those who want to know whether to let their kids watch it – especially Christian parents – the following might be helpful.

1. There is an assumption that evolution happened. Won’t worry many, but might worry some.

3. There are deaths near the beginning used to set up the story.

4. There are supernatural elements surrounding the asteroid.

5. A young minor character is caught looking at Jane from behind some bushes with binoculars.

6. Good and bad are clearly seen and understood. There is no redemption for bad guys.

7. It’s a story. Approach it with your kids explaining that it’s just a story, and you’ll clear away a lot of confusion. Even so, my son asked me today if Tarzan is real. But then, he asked me what finger food is again tonight for the umpteenth time! I think he just wants to talk.