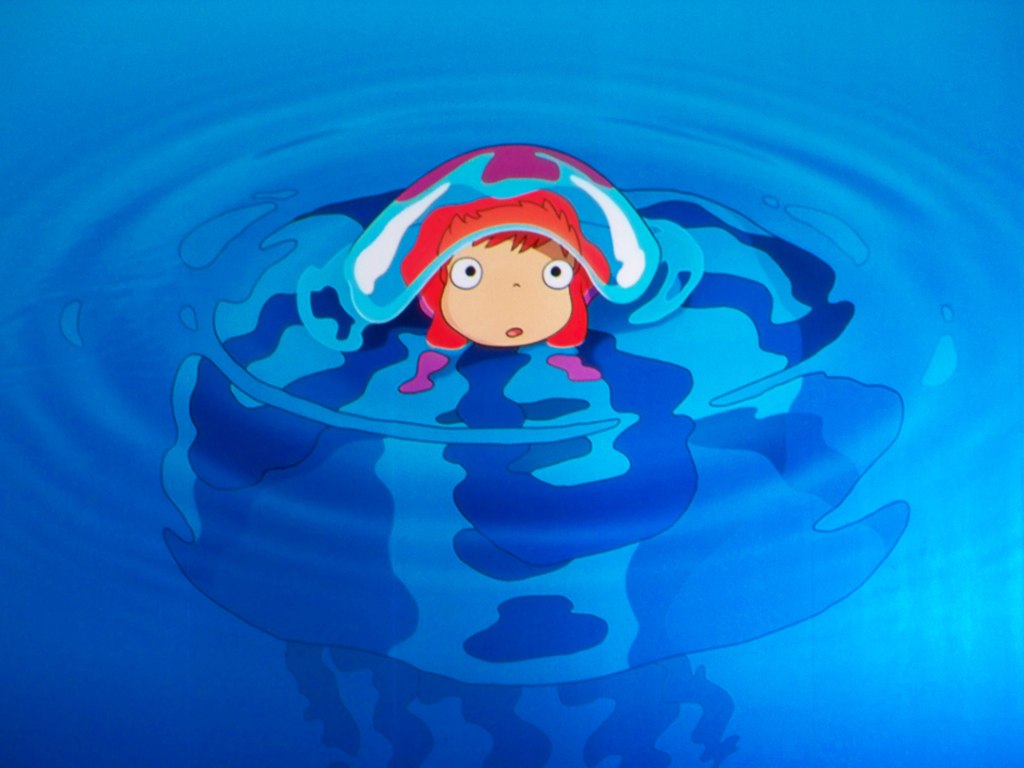 We got this movie out years ago, while Kylie was about three or four years old.

In fact, she loved it so much that all these years later, when she saw it in the video shop (yes, we still go there) she decided she wanted it. Thankfully, for me, it was not her turn to choose that night. 🙂

But it was Kylie’s turn to choose last night and I was pleasantly surprised.

What is it all about?

This is a Japanese film in the anime style, and it has a definite Japanese style of storytelling. It’s about a goldfish with a human face, Brunhilde, the daughter of a no-longer human sorcerer who’s job it is to protect the sea (and eventually cause the sea to take over the world as a whole). Brunhilde runs (or swims) away to see what she can see at the top of the ocean, gets stuck and is found and rescued by Souske, a five-year-old boy, who names her Ponyo.

After licking Souske’s cut finger, Brunhilde/Ponyo’s DNA is changed and she begins to change into a human, much to her delight. But her father takes her back, not just because he loves his daughter and hates humans, but because Ponyo’s transformation has cosmological ramifications and will destroy the world as they know it.

What happens next? Well, you’d better watch it to find out.

I enjoyed this movie more the second time round. I actually understood it better. The first time I watched it, I suppose I was expecting more of a Western story and so got confused when things did not turn out the way I thought they would in a children’s story.

There is no definite bad guy and some of the things the good characters do are so stupid as to be shocking, and yet the movie protrays them as having made the right decision. For example, Souske’s mother leaves 5 year-old Souske and a little girl she’d just met in the middle of flood waters to check on the senior citizen home where she worked – where other people were already working. The old ladies in the home, on the other hand, are all very relaxed and take things as they come, which includes a sorcerer asking them to follow him beneath the waves. The one old woman who refuses to go is seen as a cranky old so-and-so, misled by suspiscion and, what I would call, commonsense.

The build to the climax was gradual, but the climax itself was merely the asking and answering of a question. Some of the anticipation, like her father hoping Ponyo would stay asleep for everyone’s own good, didn’t really make sense except in a very weak way.

The expectations of two children and their choices were way above the five year olds I know. But, maybe that’s a cultural thing.

There were some fantastic shots and imaginative scenes throughout, especially when Souske and Ponyo were travelling on the flood waters.

Despite some weaknesses in the story, overall it managed to keep the emotional tension and provided some moments of tenderness and uplift. As a whole, it communicated good values in a very fresh – to me – way.

We also found it fascinating having the subtitles on. The subtitles were in English translated straight from Japanese, whereas the spoken dialogue used a much looser translation. One example that highlighted the cultural differences was when Souske’s mother said in the subtitles, (something like) “Your father will be disappointed to see you sad”, whereas in the spoken dialogue she said, “You can tell your father about Ponyo when he gets home.”

Different approach to emotions, much?

There is a good deal of magic in the movie and Ponyo’s mother is a powerful supernatural being of the sea, called by some sailors the goddess of mercy. They are then shown to bow and honour her as a goddess. These sort of things don’t concern my wife and I because we have made clear to our children that movies like this are “just a story” and we have always remind them that some people think differently from us. We believe imagination is a good thing, and have made a strong distinction between “pretend” and “real”.

But I am aware that some parents take a different view on these things and may not find them appropriate for their children.

This is a very peice-meal review, but if you’ve stuck with me this far, I would recommend the movie, (unless you prefer your children not to watch overt supernatural themes). But prepare yourself for a very different movie experience. Despite being worked on by Disney, it is not your typical Western flick.