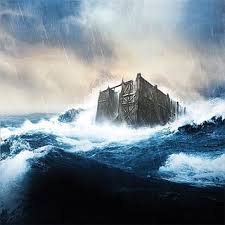 As we walked to our car after seeing the movie Noah, my wife said, “That was worse than I thought it would be.”

I said, “That wasn’t as bad as I thought it would be.”

I’m thinking that because I had already read or listened to some reviews of Noah – positive, negative and in between – I had got a lot of my grieving out of the way before I actually saw it. I’m not exaggerating. What I read about the liberties taken with the stories both offended and grieved me. So, when I actually got around to seeing it (made possible by a radio competition that my wife won), I could appreciate a lot of what Aronofsky and his co-writer actually did put in.

So, here are some of my thoughts  – positive, negative and in-between. Other than that basic outline, there’s no reason to any order I’ve used below.

There were some very creative concepts behind the revised story.

Earth encrusted fallen angels? Wow, that’s just clever. These beings, called the Watchers, helped to keep the supernatural element in the story in view. Without them, the silence of the Creator would have left Noah’s dreams and calling at the mercy of a very skeptical Western audience. Even with the miracles that were included, the theme of supernatural judgment would have been too thin to carry Noah’s actions.

The use of the term “Creator” instead of God was very apt. It kept fresh the idea that Noah’s time was pretty close to the Garden of Eden, but also that humanity’s relationship with God had soured so fast that there was not a lot of other revelation about the character of God to go on. God had judged Cain, yes, but that was the last time he had spoken (apparently), and none of the humans – even the line of Cain – seemed to dispute the rightness of the Creator judging his creations.

The weaving in of the story of Creation and the Fall. Wow, impressive cinematography. I was definitely disappointed by the obvious implication that the world was created via evolution, but how the Creation story was told and the threading the snake in and out of the storyline was pretty masterful.

Noah struggled to know God’s will. As I have read elsewhere since seeing the film, we tend to think that the OT prophets had no problem discerning the voice of God. Whether they did or not, the difficulty Noah had and the wrong turns he made were very relatable for many a Christian. It certainly gave the story more impact.

The exploration of Ham’s character. Ham’s disrespect of his father when Noah got drunk and naked was read back into the whole Noah story. Aronofsky, legitmately I thought, explored what might have been a troubled relationship/character flaws that led up to the Biblical report of Ham’s sin.

Positive stuff, yes, but there were also a lot of revisions of the biblical story of Noah that actually took away from the movie.

My wife pointed out that there was not a lot of grace involved. Apart from a few examples, e.g. the redemption of the Watchers, the possibility of a girl being saved from outside of Noah’s family, Noah’s daughter-in-law falling pregnant, the animals being saved, the dominant theme was judgement. Noah himself, as part of his struggle to know God’s will, refused to extend grace to any of humanity. Even when he accepted that his own family would continue, it was because he was unable to do what he thought God wanted him to, rather than because he accepted the grace of God.

Related to that was the primitive life of humanity. I wasn’t particularly worried about the environmental theme that was blatantly pushed – humanity’s sin has poisoned the earth we are supposed to care for though I doubt that in Noah’s time the earth was so devastated – but the impression I got from the film was that the sin of humanity leads to primitive living conditions. Not only is that not necessarily so biblically, it is clearly not necessarily so to any disinterested person living in the world today. I wonder if Aronofsky was unconsciously doing his audience “a favour” by helping them keep the evil of Noah’s day at arms length.

Related to that, is the portrayal of man as making advances only through outside help (i.e. the Watchers). This may sound odd to some people, but humanity – even sinful humanity – is capable of incredible feats and achievements. That is the way God made us. Part of the reason sin within humanity is so evil is because it runs through and is carried along by human ingenuity and advances far beyond the world imagined by Aronofsky and his co-writer. Human advance (our civilisation) is not symptomatic of goodness in the same way primitive living is not symptomatic of evil.

Lastly, fallen angels will not be redeemed. Ever. Just saying…

Actually, I should call this final section, What I’d like to have seen.  I had other quibbles for sure, but some of the departures from the biblical story were – I felt – within the bounds of poetic license. Still, here are a couple of areas I’d have liked the writers to have retained from the biblical story.

1. I can’t help but think that if Noah was presented more biblically as a figure who was preaching to people, warning them of the judgment to come, even pleading with them to come to into the Ark, then the movie would not have been so heavy and the movie would have far more emotional richness to it.

2. I would loved to have seen a deeper portrayal of evil. Contrary to the movie, the people of the earth in Noah’s day weren’t trying to get onto the Ark. No, they laughed at him and called him a fool. They lived in cities and were part of a civilisation, and people were going about their business, “marrying and giving in marriage”, oblivious to their own evil. Evil was considered good, good was considered both weak and evil. Their sin blinded them to the truth of Noah’s words.

3. One of the more unbelievable parts of the Bible for skeptics is that Noah took one hundred years to build the boat. But this was a movie within which long lives were already nestled in the background and I believe could have been useful in the telling of the story. Sadly, we as humans tend to see our minor character flaws grow worse as time goes on, and so to follow the path of various peoples’ lives whose heart inclined only to evil would have greatly deepened the emotional impact, I think, of the film. Still, this is perhaps too much to ask of a movie.

(Truthfully, I’m not greatly disturbed by the shortening of the years in the movie’s storyline. I just thought I should have a number three in this section.)

If you are a Christian, grieve your losses before you go. This is not a movie by a Christian, nor does it advertise itself as a strict retelling. This is Hollywood, for goodness sake, so realise that you will not be using this movie to teach Sunday School and rejoice in the good that you can find in this film – entertainment-wise, theologically (there is far more there than I covered) and as a stepping off point for chatting to interested people about the real story of Noah.

If you are not a Christian, don’t expect this movie to make you biblically literate. It’s written in line with the story our culture tells us about ourselves, despite the fact that it deals with judgement. Enjoy the movie, but if you want something even more thought-provoking, challenging and at the same time uplifting, investigate the Christian reading of the story of Noah from the Bible (there’s more in the Bible about Noah than the raw story in Genesis 6-9).