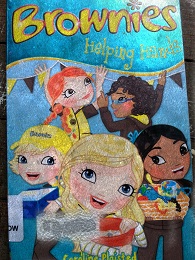 It’s really a slice of life book. The main theme is getting ready, participating in and getting recognised for Thinking Day activities. We follow the five girls at school, at Brownies, at home and on High Street. There are two points of conflict, but these are quickly resolved and are incidental to the story itself. In reality, the book reads like a promotional tool for Brownies. If only the Cub Scouts meetings I went to as a boy were full of such positivity, fun and excitement!

That’s not to say it wasn’t a pleasant read, but it didn’t present the normal story-telling device of setting, problem, resolution, and so was a different, unchallenging read.

How are adults portrayed?

This has become something I look at in every book. In this one, all adults are seen in a very positive light. In fact, there are no negative characters in the book, though a couple of the friends have a stand off because of one girl’s thoughtlessness. It’s almost the world as one would want it to be…though you could be excused for wanting some more depth.

At 121 pages, this is a short, pleasant book with almost no challenging plot devices. The story is a positive telling of a group of girls involved with their Brownie group. I can imagine it would encourage younger girls reading it (7 years or so) to ask their parents if they can go to Brownies, but they may be disappointed when they get there that everything is not as wonderful as in the book.

My daughter started reading it, but has not finished. I wouldn’t be surprised if she doesn’t get back to it before it has to be returned to the library.

Published by The Kiwi

View all posts by The Kiwi